I followed this food plan from January until October. My goal for 2013 is similar but will involve spending less than $1 per day on food for the entire year. In some ways it will be less challenging than my 2012 project.

My challenge for this year is to only eat foods:

The stipulations for those 10 items: 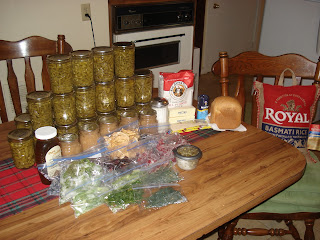 I took an inventory of all the stored food which was mostly preserved from the last growing season. Some of the green beans are from the season before last, but they are still good to eat. The fresh citrus fruits are from a my aunt and uncle's house where I went to visit in December.