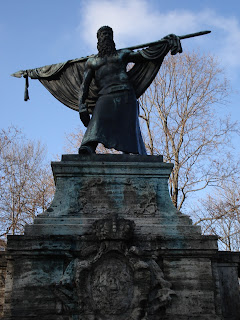 Yesterday I wrote about the strong men of myth and these stories exist throughout all cultures. Viking legends are filled with men who single handedly guarded a bridge or something similar and killed dozens of men. This is a statue of “Der Schmied von Kochel” I found him outside of a small church when I lived in Munich many years ago. I can’t remember which church the statue is near, but it is outside of tourist central so if you go to Munich you probably won’t find it. I miss going for long walks through Germany finding history and stories.

My German is very bad and I can only find the story in German, so I’ll translate the best that I can. Der Schmied von Kochel means the Blacksmith of Kochel. He is a legendary figure for Munich. During the Sendlinger Mordweihnach or the Sendlinger Christmas Slaughter in 1705 he was the last man standing in a battle at the gate of Sendlinger where around 1,100 men died by the Austrian King Joseph I army. The blacksmith is described as a 70-year old and was of great stature and strength. According to Muenchenwiki he was not a real person but a legend. From another site it says his last words were, “lieber bayerisch sterben als kaiserlich verderben“ which means something like “Love for Bayern, death and ruin to the Kaiser.” He is a symbol for the love and honor to his homeland. There are still festivals and plays dedicated to him. If he didn’t exist there was a need to create him. I said in an earlier post all history somehow becomes myth. I hold myths in very high regard it doesn’t matter if they are true or not it only matters that they are told, and an important message is always hidden under the surface. In the German language the word Geschichte is the word for both history and story.
Posted by Carrie Thore at 9:28 AM