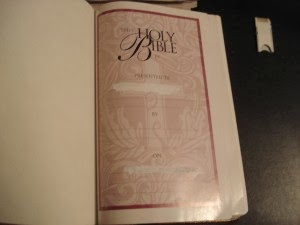 Have you ever laid a project down for only a short time and then the short time became three years? Several years ago, I started a very intense religious project which entailed watching at least five Christian sermons a week, attending humanist meetings, interviewing a witch, learning some Greek and reading the Bible on a daily basis. Did I gain anything from my obsession with religion? Not on a spiritual level... but I can beat out most Christians in Bible trivia games :)

A friend of mine has encouraged me to continue my Bible reading project and publish my work into an e-book or make it available for the general public in some other way. I did put a tremendous amount of work into writing a summaries of my daily Bible readings and it was somewhat enjoyable, but I lost interest after about 400 articles and other more pressing issues got in the way.

The following is an excerpt taken from my previous blog:

2 Kings 14 – I Chronicles
I know it has been a while since my last reading of the Bible in chronological order with a summary. The last reading ended with the death of Elisha. I do read the Bible almost daily. When I can’t read it, I have portions of it memorized to meditate over. One of the most profound books that I have read recently is “The Way to God” by Gandhi. It is a book about the beliefs he held. I borrowed it from the University library, and a girl had underlined a few portions in purple ink with “Jesus” written in bubble letters in the margins. At one point she wrote “Jesus or Paul?” Gandhi was greatly influenced by Jesus’ Sermon on the Mount and that is evident in his beliefs and actions. If the girl who had marked in the book had been paying attention, she would have noticed that on nearly every page Jesus was quoted. I know from reading about Leo Tolstoy that Gandhi and he had written several letters to one another. Tolstoy was also profoundly influenced by the Sermon on the Mount and the synoptic gospels. Neither one of the men are considered Christians or even considered themselves Christians. In the forward of “The Way to God” Gandhi’s grandson had the following statement:

Later in the Introduction of the book quotes Gandhi as saying:

“One day a British cleric, well known for his imperialistic persuasion, found himself face to face with Mahatma Gandhi. Wishing to paper over their differences, he is said to have remarked, “Well, we’re both men of God, Mr. Gandhi aren’t we?” “You are a politician disguised as a man of God,” the Mahatma replied. “I am a man of God disguised as a politician.”

I have included a picture of the Bible that I read from. When my mother cleaned out my grandparent’s house she found this Bible. My grandparents had a lot of things, so she would run across a Bible occasionally. She put most of them in her antique booth writing the word “free” on it. Every time she has done that the Bible has been picked up within a week. She found this one in a box of stuff and asked if I wanted it. It was just the Bible that I wanted for this project. I have several New Testaments from the Gideon’s and some other versions, but I wanted the red letter edition KJV. I was looking at the first page and this Bible used to belong to someone else, a woman named Tammy, who was presented the Bible on June 5, 2002. I don’t know of anyone by that name and have no idea how it came into my grandparents' possession. Tammy didn’t mark in any section of the Bible or dog-ear the pages. When I first obtained the Bible in Christmas of 2009, the only thing to indicate that it wasn’t a brand new Bible was the white-out name and a small tear on the front cover. Since I have had it, the margins have little sun symbols indicating portions of solar myths, spaghetti stains are in it, some corners have been folded, the ribbon is a little frayed at the bottom, the gold lettering on the front is chipping and one of the blank pages now lists the Jewish calendar. The only thing missing is my name in the front.

The reading tonight is interesting in that it presents a kind of battle between the earth religions that were worshipped at the time and the God that is presented in the Old Testament. They believed in many gods but could only worship one. It is interesting to read how these “competitions” between gods were viewed. There is also a cryptic passage involving 10 degrees, and I think that has to do with the sun. Something called “The Book of the Law” is found which means it was lost. King Josiah seems to have been a fervent follower of the book and destroyed all idols.


Tammy's name was whited-out by someone else. I should write my own name there, just in case I leave it somewhere. I don't want all of my notes in the margins to be lost.


Jehoiachin in Captivity – When Jehoiachin had been captive for 37 years the new king of Babylon, Evil-merodach, took him out of prison. He gave him a throne with him in Babylon and gave him new clothes, a salary and fed him well for the rest of his life.
Posted by Carrie Thore at 7:57 PM

Email ThisBlogThis!Share to TwitterShare to FacebookShare to Pinterest
Labels: Religion, Z-Books and Authors-Z