I searched for the origin of the phrase "nest egg" and have found the following incorrect explanation:

The allusion is to putting a real or china egg into a hen's nest to encourage her to lay. The connection between this and the 'savings' meaning isn't exactly clear. It may be that the idea was that the egg that was put into the nest could be later retrieved, after the hen had laid.

The practise of putting eggs into nests as an inducement to laying more is recorded from as early as the 14th century. The use of nest-egg' to refer to savings goes back to at least 1686. In 1927, Locke & Clarke printed a set of letters from that date, which included this:

"The rest, I perceive, he is not troubled should remain as a nest egg till a farther occasion."


The person who attempted to explain the origin of the phrase has obviously never raised hens. I place a wooden egg in the nesting box to encourage the hens to lay eggs in that spot. I do not ever remove the wooden egg because it has no value other than to show the hens that I would rather have the eggs there instead of randomly all over the yard. The number of eggs a hen lays is dependent on several factors, such as her breed, the amount of food she eats, and a low-stress environment. For the past few thousand years, the best egg layers were allowed to live and the others were used for chicken soup. During the 14th century, the best hen in the flock probably only laid about 50 eggs a year and the best investment would have been to leave a certain amount of eggs in the nest to let them hatch rather than eating all of the potential chickens. A broody hen is one hen in a flock that will sit on the nest day and night during the spring and early summer. The broody hen will hatch the eggs and protect the young chicks in their first few weeks of life. In our language the word "brood" means to worry or think about something obsessively. The eggs in the nest were an investment to the farmer, but without setting aside a few eggs every year, the farmer would have quickly run out of chicken soup!

A friend recently asked me if it is cheaper to buy eggs or have a flock of hens. I guess the cost is dependent on the number of eggs he eats. I eat on average about two eggs each day or 730 per year. Because eggs in this country are typically sold by the dozen, I would have to buy 61 cartons at around $3 per dozen or $183 a year. My eight hens cost about $150 per year in feed and laid 1579 eggs last year alone. The biggest cost involved with chickens is building the coop, but I've met people who have built their own coop from scrap pieces of wood and chicken wire for free. Hens also take 6 months to mature and cost $3 per chick, which can be frustrating because $100 is spent before the first egg is laid. I will keep these hens for 4 years and then sell them again at $3 a piece to whomever wishes to butcher them for themselves. From a financial perspective having your own hens is a better investment than buying eggs. If I sold the extra 70 dozen eggs instead of giving them away, I could potentially make $210 a year which would subsidize the cost of feeding the hens and yield a small profit over time. With the profits from selling the eggs I do not use, I could create my own nest egg or possibly buy some chicken soup! 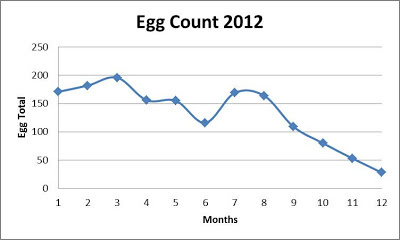