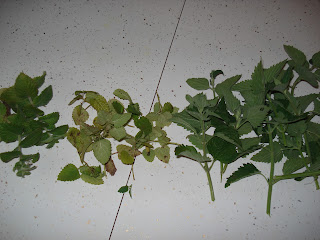 The three plants pictured are all mints. Applemint is to the left and has an intense flavor of a Granny Smith apple. The middle mint is lemon balm which tastes like lemonade and is often used as an ice cream flavoring. Catnip is pictured on the right. Most people think catnip is just for cats, but the mint also makes an excellent tea. I stored all of these mints by freezing the leaves in ice cube trays.

Mint is a common weed but can easily been identified by the opposite leaves and the strong minty odor when crushed. According to Greek mythology, Minthe was a nymph who was transformed into an herb by Pluto’s wife, who was jealous of her. Mint is the symbol of hospitality was mentioned by Ovid when two peasants, Baucis and Philemon scoured their serving board with mint before feeding guests. (The Complete Book of Herbs-1988)

In England, before the discovery of black tea in Asia, most tea was made from catnip. In the area where I live, the mint is sometimes used as a common remedy for infants with colic. I drink catnip at night to help relax and go to sleep.
Posted by Carrie Thore at 6:27 PM