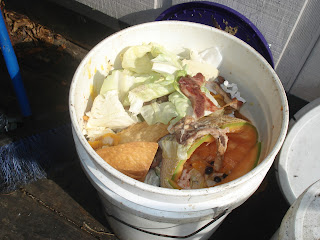 Do you know what happens to the food you don’t eat at a restaurant? If you happen to be eating at a small non-chain restaurant in a rural area, the leftovers probably go into a slop bucket. The food is saved for someone who picks it up every couple of days and uses it to feed their pigs. The leftovers are not given to a large factory farm, but to an individual with a few pigs.

“I like pigs. Dogs look up to us. Cats look down on us. Pigs treat us as equals” - Sir Winston Churchill

The average American eats approximately 50lbs of pork every year. More than likely, that pork originates from a factory farm where the pigs are housed in gestation crates for their entire lives. Know where your food comes from, there are plenty of youtube videos about the horrors that take place on factory farms.

According to the FDA, the food in the slop bucket is not fit for the consumption of swine. It is cooked food that is off limits for the pigs unless it is re-cooked for 30min. In many states (Alabama, Delaware, Georgia, Idaho, Illinois, Indiana, Iowa, Kansas, Louisiana, Mississippi, Nebraska, New York, North Dakota, Oregon, South Carolina, South Dakota, Tennessee, Virginia and Wisconsin) feeding any garbage to swine is completely prohibited, but in the state of NC feeding of re-cooked garbage is permissible.

Garbage – All waste material derived in whole or in part from the meat of any animal (including fish and poultry) or other animal material, and other refuse of any character whatsoever that has been associated with any such material, resulting from the handling, preparation, cooking or consumption of food, except that such term shall not include waste from ordinary household operation which is fed directly to swine on the same premises where such household is located.

In other words, it is illegal for you to give your own neighbor table scraps for their hogs. I like how meat is referred to as “material” and the other food which may have been associated with the “material” is called “refuse of any character whatsoever.” It sounds like a strange insult to food or something you say to your children about not associating with those other children who have a refuse character.

Who is responsible for the refuse of any character whatsoever that has been associated with any such material?

First of all, whoever wrote this should receive some kind of longest sentence award. According to this rule, it seems that if you have a large party at your house and charge a small fee for a food bill, and happen to produce “said garbage” then allow one of your guests to take leftovers home, you may be in violation of the law. It also seems less illegal if someone simply steals the “refuse of any character whatsoever that has been associated with such material” than it is for them to politely ask for the “said garbage.” I see nothing in the rules which states stealing garbage is illegal; therefore, it must not be illegal because if it were it would clearly be written in a statement like:

“If any such individual is apprehended while displacing the said garbage from the premises of a restaurant, café, boardinghouse, school, hospital or other public or private place where food is served to persons other than members of the immediate family or nonpaying guests then the said individual will face charges under penalty of law (Volume 8 pg. 3849.7 Bureaucratic Nonsense, 1984, c.834, s. 8).”

I will give the writer of the law an A+ for making up the most extravagant job description for garbage men I have ever read. Maybe if I ever happen to have a job as a garbage woman, I will write down my previous experience as:

I was previously employed by a municipality engaged in the regular collection of refuse of any character and material. I was also authorized to dispose of the said refuse and material in a legal manner.

I find it funny that nickname for the government “Uncle Sam” originated from a pork packer.

During the War of 1812, a New York pork packer named Uncle Sam Wilson shipped a boatload of several hundred barrels of pork to U.S. troops. Each barrel was stamped "U.S." on the docks. The "U.S." stood for "Uncle Sam" whose shipment seemed large enough to feed the entire army. This is how "Uncle Sam" came to represent the U.S. Government.
Posted by Carrie Thore at 7:59 PM