The following is an excerpt from The Hive:
Wherever Christianity spread in Europe, so did beekeeping and candlemaking. As candles were used more and more in church services, so Christians revered the bee and its works, with a kind of circular reasoning. The bee was a sacred being because it made sacred wax; and wax was holy because the bee was holy. The early Christians sometimes baptized themselves with honey and made crosses out of wax. In Christian worship, the flame of the candle represented Christ, the light of the world; the wick represented his soul; and the wax was his spotless body. Wax was treated by Christians as more pure than any other substance. Bees were chaste (or so it was believed), like Mary; as Christ was born of Mary, so wax was born of virgin bees.
What would it feel like to be baptized in a vat of honey?
Posted by Carrie Thore at 8:33 PM 1 comment: 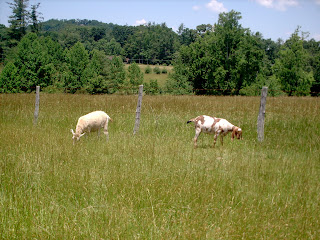 Today I made a pot of goat stew. I cooked several patties of ground goat meat a couple of months ago and keep them in the freezer. Each patty is equivalent to around 1/3 cup. I grew all of the vegetables used in the stew. Over the past few months, I have developed such an appreciation for food. It used to be something routine to eat a carrot and I didn’t really enjoy eating them. Now that I have to wait several months for my food to grow, carrots have turned into a food I relish. That being said, I’m not exactly sure how good the recipe for this stew actually is because I now like eating foods that others may find bland and boring.
Here are the ingredients:
1/3c ground goat meat (already cooked and frozen)
1/3c rice
1/3c sugar snap peas (with pod)
1sm potato
2 radishes
1 scallion
1/8c green peppers (frozen from last season)
2sm carrots
1/2 carrot top
1/3c broccoli
salt
water
Posted by Carrie Thore at 9:09 PM No comments:

Thirty Winters off My Back 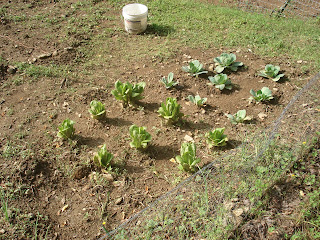 I’m reading through Goethe’s “Faust” because it is such a fascinating book on human nature. There is a scene where Faust asks Mephistopheles about becoming young again. Faust doesn’t want take a witch’s potion, so he asks Mephistopheles if there is some other way to be young. Mephistopheles answers Faust by telling him to go work on a farm, not allow his moods to control him and not think too much. He is giving him the answer to lead a simple and long life. It’s good advice for anyone, but very few people take such advice and choose witchery instead. Nowadays, the witchery can be seen in people who take medications to control moods or in people who pay for plastic surgery to appear young. The normal diet of the people in this country is not conducive to a long and healthy life. Very few people even know where their food comes from or even care as long as it tastes good.

Mephistopheles: Very well; it comes your way
Without physician, gold, or magic-rigging:
Go out into the fields, today,
Fall to a-hoeing, digging,
Contain yourself, your mind and mood,
Within the narrowest of spheres,
Subsist on uncommonly food,
Live as a beast with beasts and spurn not chores unsung,
In person spread your crop-fields with manure;
This is the best resource, you may be sure,
Through eighty years to stay forever young!
Faust: I am not used to that, it goes against my marrow
To put my hand to hoe or harrow.
A narrow life would suit me not at all.
Mephistopheles: So back to witching after all.
Posted by Carrie Thore at 9:06 PM No comments:


The picture above shows capped brood from my hive. You can see what a good queen I have because she has a consistent laying pattern. Capped brood like this is called a “peanut butter smear.” It is amazing that the queen knows which cell to lay fertilized eggs or unfertilized. The fertilized eggs will turn into female worker bees and the male drones are from unfertilized eggs. I couldn’t find any information on how exactly the queen knows which type of egg to lay. The drones eat three times as much honey as the workers and never do anything around the hive. Their sole purpose is to mate with a queen from another hive. Beekeepers do not usually kill the drones, but in the past it was common to rid the hive of those lazy good for nothing freeloading… I think I’m getting a little carried away.
In the “Hive and Honey Bee” written by Lorenzo Langstroth in 1852, he wrote to his critics of disposing of the abundant drones in the hive:
“I have no doubt that some of my readers will object to this mode of management as interfering with nature: but let them remember that the bee is not in a state of nature, and that the same objection might be urged against killing off the super-numerary males of our domestic animals.”
Langstroth does have a point. I don’t think a lot of people realize that most of our domesticated animals produce an equal number of male and female offspring. For example, male baby chicks are usually killed within minutes after hatching. Queen bees do not produce an equal ratio of males to females. Sometimes a queen will produce only males after all of her fertilized eggs have been used up. The drones are killed during the autumn when they are kicked out of the hive. If they refuse to leave quietly, the workers will chew their wings off and then throw them out. It is really quite an amazing instinct.
You can see a little bit of honey is capped in the bottom left corner. The rest of the honey is uncapped and is not dehydrated enough by the bees to be capped with wax. The bees create an airflow by beating their wings to lower the amount of water in the honey. If I were to take this frame out and attempt to extract honey, the amount of water would cause the honey to ferment. That is why it is important that at least 70% of the honey is capped before harvesting.
I guess I will have to wait a little longer before I can have a pint jar of honey made by Carrie’s Apiary :)
Posted by Carrie Thore at 9:15 PM 2 comments: 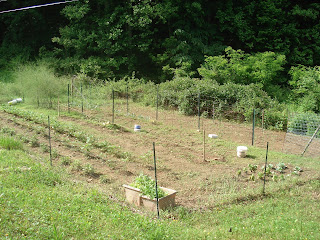 Here are some pictures I took of the garden on the 16th of May. I have since added 8 tomato plants and 6 green pepper plants. I am trying companion planting this year such as with the lettuce, radishes and carrots planted together in a couple of boxes. The tomatoes are planted next to the asparagus as companions because the tomatoes produce a chemical which detracts asparagus beetle and asparagus produces a chemical that kills the nematodes that may feed on tomatoes. I’m also trying the three sisters’ method of planting with corn, climbing beans, and a few different varieties of squash and pumpkins. Sunflowers and cucumbers will be planted together because the sunflowers shade the cucumbers. 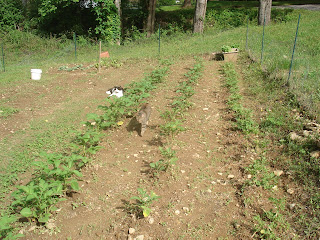 The potatoes were affected by the frost and the first row I planted actually has the smallest plants. The middle and left row are Kennebec potatoes which grow well for this area. The variety is highly resistant to blight. So far this year, I have not had a major problem with potato beetles. It is a yellow and black beetle that likes to munch holes in the leaves. Wikipedia says it became resistant to DDT in the 1950’s and other insecticides have been used, but the potato beetle has developed resistance to all of them. The two that I have observed were immediately flicked off and killed by rock-squishing because they are not resistant to that method of extermination yet. I dug up a few plants to see how “done” the potatoes are, but the potatoes were small. I did get a couple meals so far. When a potato plant develops flowers it means it is time to dig them up if you want what is called “new potatoes.” New potatoes have a thin skin and are much more flavorful than if you wait until the potato stalks have dried up and died. 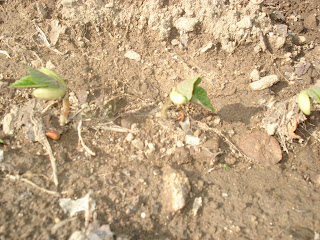 The above picture is of newly emerged peanut beans. It is a half-runner which means it needs about 3ft of climbing room. This year I will plant 5 different kinds of beans. I have already planted several rows of Bluelake bush beans and greasy beans. I also planted something we call magic purple beans which is a kind of butter bean. I have no idea of the actual name of the bean because it is a local variety. Beans are great because they have a symbiotic relationship with a nitrogen fixing bacteria which means it adds nitrogen to the soil reducing the need for synthetic fertilizers.
Posted by Carrie Thore at 9:32 PM 3 comments:

Aren’t my honey bees adorable? You can see the various colors of pollen and the nectar stored in the cells. Eventually they will cap these with wax and it will be honey. The grey pollen is probably from blackberries. I observed a bumblebee pollinating the asparagus and it had such bright orange pollen sacs. I’m not sure if asparagus is the origin of the orange pollen in these cells, though.

I recently purchased a jar of honey from a local produce stand. I didn’t pay much attention to the label other than it supposedly sourwood honey and it was produced in Asheville. It is the wrong time of year to purchase fresh honey, so this honey is from last year. I know most of the local beekeepers, but I do not know the people who have the bees which made this particular honey. I tried a spoonful as soon as I brought it home, but it doesn’t taste like the honey I’m used to. I did a little research about who the beekeepers are and discovered that there were many complaints about the honey. It turns out the label says “Packed for” which can mean it is not local honey or even sourwood honey. I don’t know of any beekeeper that has someone else pack honey for them. It would be somewhat of an inconvenience to ship the honey away just to have someone else put it in bottles when most beekeepers have their own extracting equipment. In the case of the beekeeping club I belong to, the extracting equipment is available for a small fee.

Moral of the story: Know your beekeeper.
Posted by Carrie Thore at 8:38 PM 2 comments: