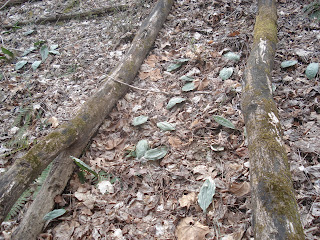 Warning: Do not eat plants or fungi found in the woods based on my photos!

I’m taking a botany class on local flora, and puttyroot is one of the species I have to memorize this semester. I first noticed puttyroot last year because it is one of the few green plants in winter. It has only one leaf which sits directly on the forest floor. Puttyroot is in the orchid family (Orchidaceae Aplectrum hyemale), but it has a rather boring flower so it isn’t cultivated like more showy orchids. There is a colony of them in the woods behind my house. I counted 80 individual plants in my field of view, so I didn’t think it would be harmful to dig up two plants to eat.

My edible plant book says:
Puttyroot Use: Cooked vegetable. Boil the bulblike corms for 20min and serve with butter.
Note: Relatively uncommon; use only in emergencies. 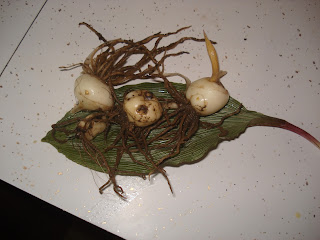 An alternative name to puttyroot is Adam and Eve Orchid which is named for the fused corms. One of the plants I dug up had 3 fused corms, so I guess it was an Adam, Eve and Cain Orchid. The corms are very sticky and can somehow be used to create a glue-like substance. I decided not to eat them because they didn’t smell like something I would like to eat. It is good to know that these are edible, though, just in case I should ever find myself lost in the woods.

If you live in the following states, then you should follow the state laws and not disturb puttyroot: