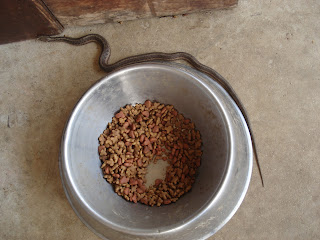 The previous statement is obvious to most people, but some extreme vegan and vegetarian websites seem to believe humans are supposed to be herbivores. I have a problem with the terms herbivore, omnivore and carnivore because animal diets do not fit neatly into those categories. For example, my carnivorous cat will eat cat food which contains corn meal, wheat flour and soy flour. Do you see the picture of the garter snake and cat food? It would make much more sense if my cat would have eaten the snake and left the cat food; instead she let the snake go and ate her grain-filled cat food. Herbivore eating behaviors are also just as confusing as my cat's behavior. Someone who has never raised rabbits may not realize that rabbits can be cannibalistic. It is somewhat normal for a mother rabbit to eat a few of her own young. A common practice among people who raise rabbits is to place a piece of bacon or hamburger in the mother rabbit’s cage shortly before she is due to give birth because if she needs the extra protein after the birth, she will eat the meat instead of her offspring. Other animals we normally think of as being strict herbivores, such as cows and deer, oftentimes eat small birds. Many egg cartons proudly display the statement, “Vegetarian fed hens.” Chickens are not naturally vegetarians so I’m not sure why it is something to brag about on egg cartons. The statement tells me that the chickens must not be allowed outside or are simply corn and chicken-feed. Chickens are predatory hunters and will even gang up on a snake or rodent to kill it. I think they would even eat me if I happened to become severely injured in the yard.
Several vegetarian and vegan sites try to convince others that as a species we are herbivores. I have no problem with vegetarians or vegans but I don’t like how they manipulate information to spread their personal memes. One thing I noticed is that many of them seem convinced that chimpanzees eat an entirely plant based diet. Chimpanzees are omnivores and often form hunting parties to kill monkeys. Humans are also omnivores and our bodies can tolerate a huge variety in diet. After reading about the teenager in Britain who lived off of chicken nuggets for 15 years, it seems that humans can live off of just about anything. People evolved to eat what was available in their environment. Some people groups ate more meat and others ate more plants. It is true that humans cannot live completely from a meat diet, but if we eat the organs it does provide enough nutrition for extremely long periods of time. Our bodies can even tolerate a lot of raw meat, but most people like their food cooked. I read a study about how primates preferred cooked meat and some types of cooked vegetables. Cooking food releases vitamins and nutrients which make it easier for our bodies to digest. As soon as our ancestors discovered fire, they started cooking their food.  For our forefathers (and foremothers), there was no magic ratio of plant based diet vs. meat because they ate whatever kept them from starving to death. In our western culture, we have too much time on our hands to consider what we like to eat and what we do not like to eat which means people can obsess over foods they prefer and would prefer others to eat.
Posted by Carrie Thore at 10:50 PM