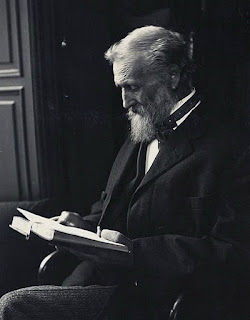 I like reading John Muir’s essays because he was so observant. The following excerpt is from “My Boyhood and Youth” where he describes the honeybee. This was written in the mid 1800s about his family’s farm in Wisconsin.
The honey-bee arrived in America long before we boys did, but several years passed ere we noticed any on our farm. The introduction of the honey-bee into flowery America formed a grand epoch in bee history. This sweet humming creature, companion and friend of the flowers, is now distributed over the greater part of the continent, filling countless hollows in rocks and trees with honey as well as the millions of hives prepared for them by honey-farmers, who keep and tend their flocks of sweet winged cattle, as shepherds keep sheep, -- a charming employment, “like directing sunbeams,” as Thoreau says. The Indians call the honey-bee the white man’s fly; and though they had long been acquainted with several species of bumblebees that yielded more or less honey, how gladly surprised they must have been when they discovered that, in the hollow trees where before they had found only coons or squirrels, they found swarms of brown flies with fifty or even a hundred pounds of honey sealed up in beautiful cells. With their keen hunting senses they of course were not slow to learn the habits of the little brown immigrants and the best methods of tracing them to their sweet homes, however well hidden.
Posted by Carrie Thore at 5:38 PM