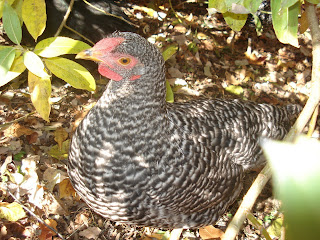 I have heard and read about a scientist who would like to create a chickenosaurus. It is such an interesting idea because it would be like evolution in reverse.

LiveScience: Starting with a chicken, how close could we really get to what a dinosaur looked like?

Horner: We’re working with an animal that has all the right stuff. It’s more about subtle changes, adding a tail or fixing a hand or possibly adding teeth, what we would think of as being relatively simple changes rather than messing with physiology or something like that. A bird is really a dinosaur, so we’re pretty sure that the breathing apparatus of a bird evolved from the breathing apparatus of a dinosaur, and is therefore completely different than a mammal. The physiology of a bird is evolved from a dinosaur and not from a mammal, so it’s not like we’re trying to take a mammal and turn it into a dinosaur.
Posted by Carrie Thore at 4:02 PM

Email ThisBlogThis!Share to TwitterShare to FacebookShare to Pinterest
Labels: Chickens