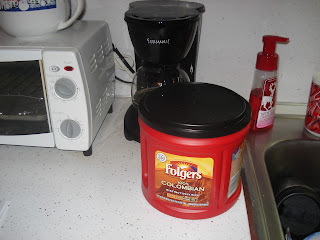 I broke down and added coffee as one of my 10 store-bought foods. It was a moment of weakness when I had to read through a particularly dry chapter of a textbook. Maybe it is a wasted food item, but sometimes a little caffeine gets me out of a bad mood or relieves a mild headache. I went for nearly three weeks without coffee which shows I’m not addicted to caffeine. I just need a little jolt of energy every now and again. I don’t even like the taste of coffee but the caffeine is worth drinking coffee. The smell used to make me nauseous and still does if I make a pot early in the morning. I tend to drink coffee in the afternoon or when I need to study.
I found some interesting facts about coffee on natgeo:
-It is the 2nd most traded commodity in the world surpassed only by petroleum
-Coffee is the 2nd most recognizable odor and burning wood is the first
-The nation’s most popular drink that isn’t water
-1670 – Dorothy Jones of Boston was granted a license to sell coffee, and so became the first American coffee trader.
-1688 - Coffee replaced beer as New York City’s favorite breakfast drink.
-1861-1865 – During the Civil War, soldiers went to war with coffee beans as a primary ration.
-1865 – Coffee percolator was invented.
-1995-present – Because of Starbucks, coffee consumption skyrocketed, rising 700%.
Posted by Carrie Thore at 6:39 PM