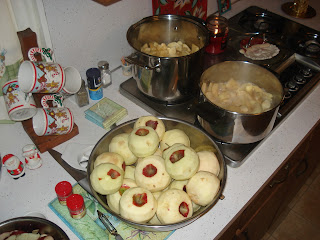 I spent part of the weekend canning applesauce. It was the first time I have ever canned anything by myself. The half bushel of apples made a little over 18 pints of applesauce. Total preparation time took about 4hrs. The vast majority of that time was spent in waiting for the pressure cooker to seal the jars which took a total of 45min for each of the two batches.

The first step in making applesauce is pealing. I used a handheld potato pealer, but I'm sure there are special apple pealers available for those who want them. I sliced the apples and put them in a couple of large pots with about an inch of water in the bottom. I heated the apples until they had softened then I mashed them with a potato masher. The total amount of brown sugar for 18 pints of applesauce was 1cup. The brown sugar isn't really needed, but I like the color of darker applesauce. I also put about 4tsp of apple pie spice which is just powdered cinnamon and nutmeg and is really unnecessary, but it tastes excellent. 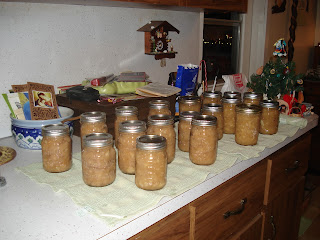 The next step of the applesauce preparation is canning. Each pressure cooker is a little different and yours should come with a booklet which tells you at what pressure and for how long each food to seal in the jar. My book said pints of applesauce should be brought up to 15 pounds and then the heat can be turned off. It is extremely important to NEVER open the lid of a pressure cooker while it is cooking.

There were so many pealings left over which made an apple feast for my chickens.

It gave me such a feeling of accomplishment to have finished with making my own applesauce for the upcoming year :)
Posted by Carrie Thore at 6:10 PM